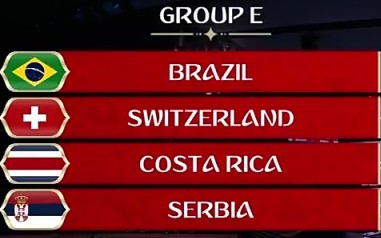 Group E of the World Championship brings us to the top of the main trophy winner, Brazil. It seems an easy group for South Americans, but I think they will have enough emotions. We should not neglect the two European bands, which are always capable of surprises. The teams that make up this group are: Brazil, Serbia, Costa Rica and Switzerland. This will be one of the most watched groups of the tournament.

Brazil is the winner of five World Championship editions and the main favorite of betting this year. However, the Selecao national team has long won the big trophy. It’s a very spectacular band, but it has a lot of minuses. He had no emotions in the preliminary round in South America, winning the group easily. The Brazilians are expecting to go over the shame four years ago. Brazil’s selector has no defeat when it’s on their bench.

Serbia is capable of big surprises in my opinion because they have a very valuable team. He also demonstrated it in the preliminaries when he won a infernal group he was part of. In betting it seems quite difficult to pass the group, but in my opinion it can be peer to peer even with Brazil. The spirit of struggle characterizes it. What is quite interesting about Serbs is that their selector has no official match on their bench.

Costa Rica is coming to an excellent tour four years ago, finishing in the quarterfinals, the question is whether it can still make a remarkable performance. They have qualified without problems at the World Cup, but we must keep in mind that the opponents were somewhat modest. Their most famous soccer player is Keylor Navas, the goalkeeper of Real Madrid.

Switzerland is a band that has grown a lot in recent years. The FIFA rankings show this very well. He had to play the bar in the preliminaries. At first glance, they will fight Serbia for the second position. As I said, those in Switzerland have their strengths and can take advantage of it anytime and can even pose a problem to Brazil. All the teams assigned to this group can make a good result.