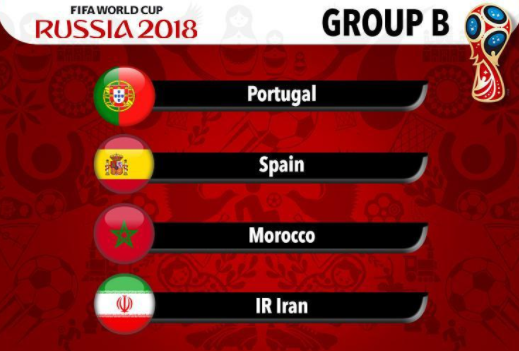 Group B of the World Championship is one of two big favorites. It seems hard to believe surprises, and the first two positions of the rankings are already known, at least on paper. This group is very interesting because of the teams that are fighting for the first position. The four teams in this group are Spain, Portugal, Iran and Morocco.

Spain is ranked third in winning the trophy and traverses an excellent period. They did not have emotions in the preliminaries, where they ended without defeat in a rather difficult group. Style is among the most spectacular in the world. Iberians won the World Cup eight years ago. Spain has great expectations from the final tournament. He is led by the technical bench by a former goalkeeper, who knows very well to highlight the best players of the team.

Portugal is the European champion and presents itself at the start of the final tournament with great ambition. It remains to be seen if he can repeat the excellent evolution from the European in 2016, when he has overcome the calculations of the paper. In the qualifying group, the Lusitans played very well and finished the group with 9 wins. Their big star, as expected, is Cristiano Ronaldo, who is excepting a lot of things at this final tournament.

Iran is the best-rated Asian team but with the last chance in this group so difficult. He certainly has nothing to lose, just to win at this final tournament. He has never crossed the group stage at a World Cup edition It is led by the Portuguese Carlos Queiroz, a selector who understands the football in the area. World Cup qualifiers were just a formality, Iran ending unbeaten in the first position.

Morocco is a team that can surprise with some players at strong clubs. In the preliminaries they did not have emotions, winning without a defeat a group. He has not even scored a goal in the six games in that group. Morocco may be the surprise of this group but considering the bands that are fighting for the first two places is almost impossible.