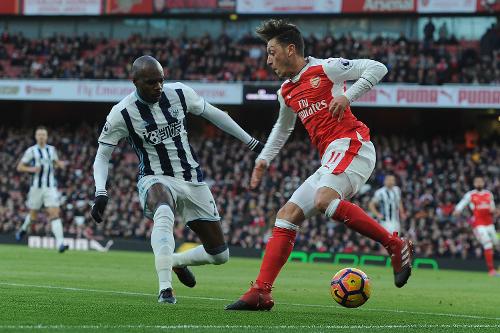 There are only a few days until the New Year, but football continues with very spectacular matches. Today’s Premier League last match from this season is the meeting between West Brom and Arsenal. The point dispute will be a big one because both teams need a lot of points.

West Brom has reached the last position of the ranking and has the status of a red flashlight, following the results recorded today. The hosts of today’s match have only accumulated 15 points in the standings and thus occupy the last place. In the last five matches they have a very weak psychical form, because in this period they have only scored two points after results of equality.
Arsenal hopes to win today because it is in a form of growth. Tuners come after a win against Crystal Palace with a score of 3-2 away. Arsene Wenger’s students are ranked on the sixth place in the ranking after having accumulated 37 points. In the last five matches, Arsenal did not know the taste of defeat, getting two wins and three draws this time.

Players unavailable:
West Brom: Chadli, Morrison
Arsenal: Cazorla, Giroud, Monreal, Ramsey
Today we are counting on a very spectacular match between the two teams but in which we have a clear favorite for getting the three points in the standings. Guests are the favorite and will bet on their victory.